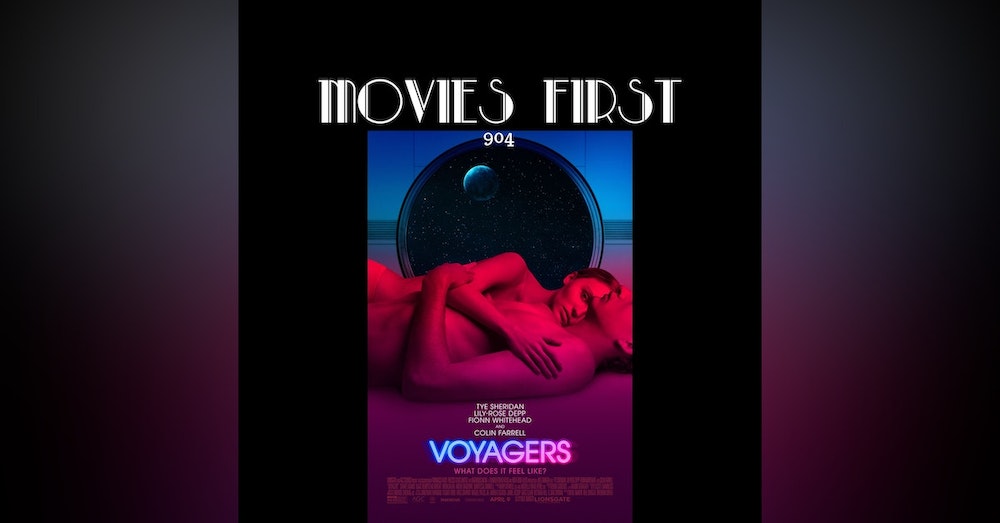 Movies First with Alex First
Episode 904
Answering the big question...should I see this movie?
Voyagers (Adventure, Sci-Fi, Thriller)
A crew of astronauts on a multi-generational mission descend into paranoia and madness, not knowing what i...

A crew of astronauts on a multi-generational mission descend into paranoia and madness, not knowing what is real or not.

Lord of the Flies set in the not too distant future, but without the impact.

That, in a nutshell, is Voyagers.

The concept is not new.

Heat, drought and disease are threatening the long-term future of the planet.

So, the powers that be hatch a plan to a/ find another planet that can sustain human life and b/ begin populating it.

So, he volunteers to join them, although that wasn’t the original game plan.

His presence will also allow the lot of them to depart Earth three years earlier than would have been the case if they had left without him.

After take off, we cut to 10 years later and are given insight into the daily routine on board their vessel, named Humanitas.

By that I mean carefully crafting test tube babies, who will grow up in a confined environment – without access to wide open spaces, sunlight or other people, save for their instructor – and after seven years will shoot for the stars (literally).

There is a total of 30 of them and the journey will take them 86 years.

So, it won’t be them, but their grandchildren who will begin populating the new planet.

Their instructor is Richard (Colin Farrell) and he feels a sense of attachment and commitment to the kids.

Without providing spoilers, let me just say that from there on in, smooth sailing it isn’t.

Voyagers asks the moral question, why should we be good? If we’re all going to die in the end anyway, what does it matter whether we’re “good” or not?

The script by writer and director Neil Burger (The Illusionist) lacked credibility and some of the characterisation and dialogue were decidedly pedestrian.

I felt the film was slow and it dragged.

Colin Farrell’s was, to me, the most credible and sympathetic role.

The film is deliberately given a cold and barren look to reflect the scientific nature in which this vital “experiment” is being undertaken.

More than that, while measured and sensible, the young adults have no personalities, to speak of ... until that changes.

The lighting gives the surrounds a green “medical grade” hue.

While I could almost swallow the contention to commence proceedings, the longer the film went, the more it lost me.

While acceptable, I can’t say I was particularly “sold” of any of the other performances.

Lily-Rose Depp is cast as Chief Medical Officer Sela, while Tye Sheridan is Christopher, who is called to step up. Both did what was necessary.

all but becomes a caricature of a villain.

I am afraid, I simply didn’t buy what they were “selling”, which leads me to the conclusion that this is one voyage not worth taking.